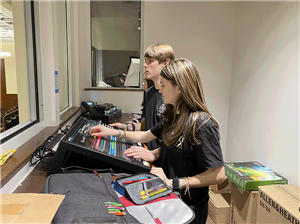 When high school junior, EvaMarie Mastrantoni, and senior, Tyler Brownstein were helping with the Somers Middle School musical last spring, they quickly noticed that the soundboard and audio equipment in the auditorium were in serious need of an upgrade.

“The microphones were cutting out at random times, and you couldn’t mute some of them,” says Mastrantoni.

“It’s all compatible,” says Brownstein. “So, if you learn at the middle school and come up to the high school, it’s the same program, which is one of the things we love about it.”

The crew prioritized making the new board organized and accessible to students who are new to working with audio equipment.

“Their efforts have made such a difference for our programs at the middle school,” says Jeff Getman, middle school principal. “The new soundboard is so much easier to use, and we are so grateful to them.”

Mastrantoni, who was pulled into sound tech reluctantly and initially only did it to help her friend, Tyler, has fallen in love with the craft and plans to pursue technical theater and sound design in college. Brownstein is following his other passion, cooking, and has been accepted into the Culinary Institute of America.