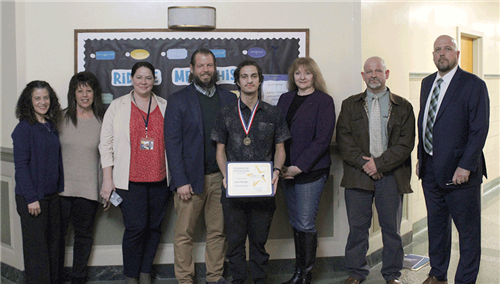 It is rare for any student to have distinguished themselves as quickly as Zane Murphy has in his time at Fox Meadow High School. In recognition of Zane’s accomplishments, PNW BOCES administrators gathered at the Somers Middle School Library during Tuesday night’s Board of Education meeting.

After being introduced by BOCES Assistant Superintendent Lou Riolo and the Somers Board of Education, Zane stepped up to the podium beside Fox Meadow Principal Michael Colvin.

“Zane has the distinction of being well regarded by both students and staff,” said Colvin. “Staff describe him as kind, respectful, inquisitive, hardworking, driven, and goal-oriented. In class, Zane diligently works each day on assignments and actively participates in classroom discussions with thoughtful questions or comments.”

Zane has shown not only an interest in furthering his own education and growth, but also an interest in his peers and staff members. They describe him as both a leader and a role model on campus.

“If you really want to learn, you can do that at BOCES,” Zane said. “They provided me with all of the programs and hardware that I needed.”

Also a student at BOCES Career and Technical Education Center, Murphy has made a significant impact on both staff and peers there. He plans to pursue post-secondary education in music production, and everyone at PNW BOCES is excited to hear about all of his future successes.

“With his strong work ethic and leadership skills,” Colvin said, “we know Zane will succeed in anything he pursues.”