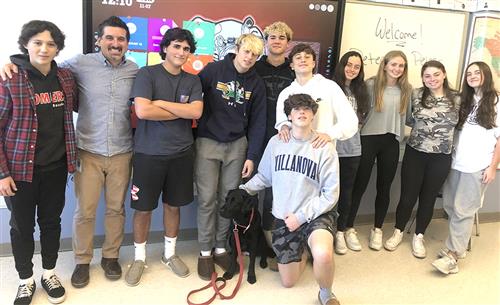 Acorn, a three-year-old black Labrador Retriever circled the classroom sniffing furiously before settling at the foot of a student seated in the front of the classroom. Acorn wagged his tail excitedly and began to drool -- he found the scent of gasoline that was placed on a student’s shoe and knew he would be getting a food reward for a job well done.

Students in Chris Kollarus’ Criminal Law class at Somers High School got a special visit from Westchester County Police Detective John Peters and his canine partner Acorn. One of the WCPD's arson detection dogs, Acorn sniffs out accelerants and ignitable liquids in suspected arson cases. Peters gave the class an overview on Acorn's training and how he is an essential part of working arson cases with WCPD. “Acorn and I do about 100 fires a year,” Peters said. 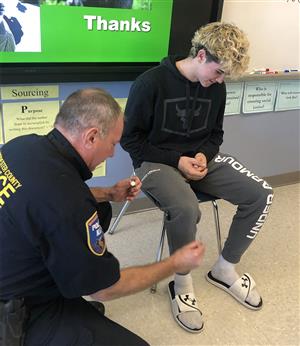 Peters said the black Lab breed is uniquely qualified to work in arson detection due to the sensitivity of their noses -- over 250 million olfactory receptors can sense even the most minuscule ignitable substance. Their keen noses, combined with their intelligence, gentle and social nature, and high play and food drives, make Labs perfect for the task. Arson detection dogs are trained with a food reward system.

For the safety of the team, they wait until a fire is completely out before going in to investigate and Acorn is always on his leash. In addition to sniffing out the burnt remains of a suspected arson, Peters said Acorn is also a valuable part as the crime unfolds. “He would be able to detect the slightest amount of an ignitable substance in a crowd of spectators gathered outside of the scene of a fire,” Peters said.  “Arsonists often stick around to see their work.”

Peters showed the class just how good Acorn is at his job. To demonstrate, Acorn left the classroom for a few minutes while Peters placed a droplet of gasoline on tenth grader Miguel Iglesias’ shoe. Once back in the classroom, Acorn swiftly circled the room and stopped at Iglesias’ feet. The drool began instantly, and Peters rewarded Acorn with a scoop of kibble. 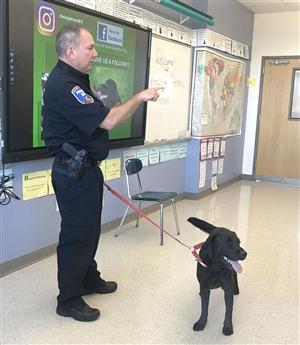 Iglesias said Peters’ presentation to the class was very informative and he learned a lot about the use of dogs on arson cases. He added that it was incredible to watch Acorn react so quickly to the smallest drop of gasoline. “I thought that was really cool,” he said. “I learned so much about how the dogs help during an arson investigation.”

Tenth grader Adrianna Adelman said she did not know much about the arson dog use in WCPD prior to the visit. “It’s really interesting to see what Acorn is capable of,” Adelman said. “I learned so much about what goes on behind the scenes in an arson investigation.”