A Lesson on Mistakes in Fourth Grade ELA

In Jennifer Mojica’s class, fourth grade students learned about mistakes and the importance of the lessons we learn from them.

For a recent ELA lesson, Mojica read the book “The Girl Who Never Made Mistakes.” The story is about a girl named Beatrice who never made a mistake, but when she finally did, her reaction to the mistake ended up making her happier.

Mojica led the students to think about the character traits of Beatrice before and after her big mistake. They all agreed that striving to be perfect probably caused Beatrice a lot of stress and once she realized mistakes are okay, she was able to have some fun. 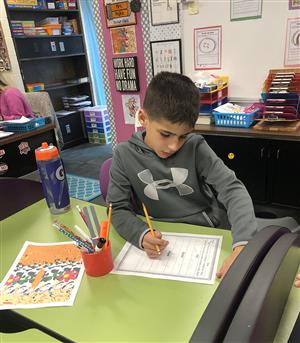 Students then had to reflect on times they had made mistakes, how they may have fixed them and what they learned from both the mistakes and the story they read in class.

“I learned that nobody has to be perfect,” said Tyler Truitt. Truitt said a tool he uses to fix a mistake in school is to “erase it and go back and do it again.”

Ayla Kramer said her favorite part of the story was when Beatrice laughed at her big mistake – standing on a stage in front of a crowd with her pet guinea pig and a popped a water balloon on her head.

“I liked Beatrice a lot better after that,” Kramer said. “I learned that you don’t have to be perfect.”