A Special “Thank You” for the Pulsera Project 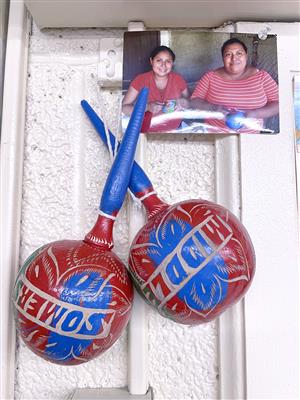 “We were so moved when we received this gift,” Soares said. The maracas are made from the wood of the Jicaro tree found throughout Nicaragua. Each maraca was hand-painted and then chiseled with a small knife by the designer. The letter from the Pulsera Project that accompanied the maracas thanked Soares and Gottlieb for “partnering with Central American artists to make the world a more just and colorful place.”

Soares and Gottlieb introduced the Pulsera Project to students and staff two years ago through a sale spearheaded by the middle school’s International Club as a service project. The Pulsera Project is a non-profit organization committed to helping Central American communities through empowerment and education. The organization partners with student groups in the United States to bring colorful handwoven pulseras (bracelets) and bolsitas (purses) made by artists in Nicaragua and Guatemala to their communities.

All proceeds raised in the school sales are sent back to the Pulsera Project to fund programs in education, university scholarships, housing programs, healthcare, workers' rights advocacy, gender equality, environmental initiatives, and more in Nicaragua and Guatemala. 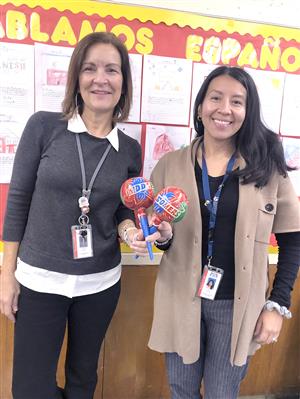 The first Somers Middle School sale in 2021 exceed expectations with more than $1,310 raised. But in 2022, they doubled the amount raised and sent more than $2,600 back to the Pulsera Project.

“After each sale, we send the proceeds and return any items we did not sell,” Soares said. “We sold everything.”

The Pulsera sale is a testament to the generosity and commitment of the school community to assist where they can, but Soares and Gottlieb said it is also a tremendous tool for introducing topics like solidarity, charity, and global citizenship to students.
“This is a fair-trade initiative, and the sale provides a market for the artisans to sell their products,” Soares said. “We work in partnership and solidarity.”
Prior to the sale, Soares and Gottlieb prepare Advisory lessons for students that include a promotional video and speak to the initiative during World Language classes. International Club students create flyers to hang throughout the school.

“Students and teachers alike are looking forward to the sale,” which will be held in March of 2023, Gottlieb said.
The student body supports the initiative as a way of helping those less fortunate in Central America. Students who purchased the pulseras and bolsitas said they liked the idea of supporting a good cause and even purchased specific color combinations similar to flags in Central American countries.