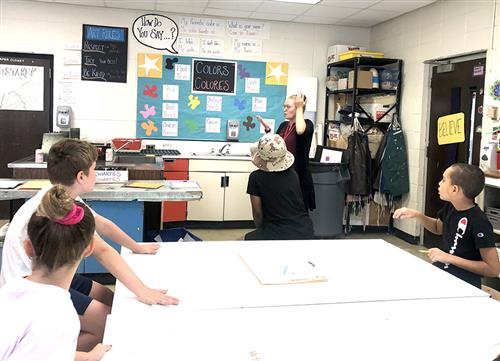 Statements and questions like this are becoming more common in Meghan Gioffe’s art room at Somers Intermediate School, now a place for third and fourth graders to work on their Spanish along with their art lessons. The art room walls, typically splashed with bold colors and artwork, are now dotted with colorful signs of English and Spanish words for colors, tasks, shapes, art supplies, and more. 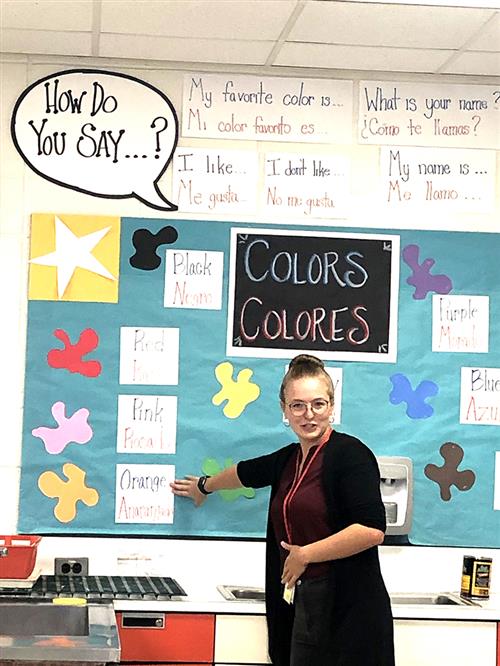 “The students are really excited about learning Spanish,” Purnell said. “They come in asking questions and are practicing what they’ve already learned. They are really using their resources to sound words out.”

Gioffe typically instructs her students on the art project by showing them an example. Now she incorporates two. The current project is the “Name Fish” also known as the “Nombre Pez.”

“I think that this program is off to a beautiful start and the students are really engaged and eager to learn,” Purnell said. “Language learning is done best through social experiences and play, which is why we thought that introducing it in the Special areas would be a great first taste of foreign language.”

Gioffe and Purnell are excited when they hear students whispering Spanish words and quizzing themselves and each other as they work on their projects. Purnell takes the end of the lesson to work on the Spanish lesson and each week she plans to build on what students have learned previously and create interest in Spanish while they are working on other themes. This week she has students working on phrases and questions related to names and favorite colors and they are enjoying the lessons.

“Students come to class ready to learn and practice a new language, which I always tell them is a really brave thing to do because learning a language is hard,” Purnell said.

Camryn Carbonaro said learning a new language in art is a great concept. “I only know how to say hi in Spanish, so I really like learning more words while in art class,” Carbonaro said. “It’s fun.”

“I am happy to be learning Spanish words in art,” said James Jackson. 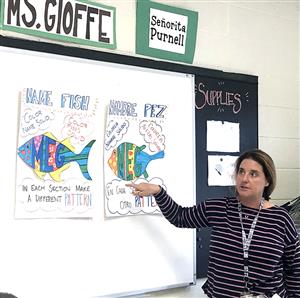 The World Language immersion program will continue to grow and reinforce existing curriculum in areas such as Morning Meeting, physical education, and music for third and fourth graders. Plans are underway to incorporate the World Language program into the fifth grade for the 2023-24 school year.