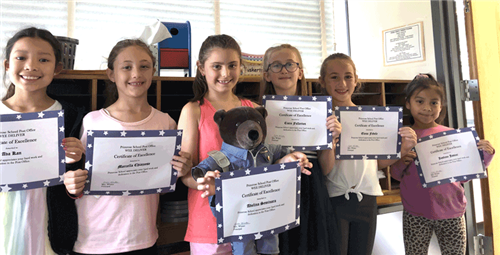 After a very busy year, the Primrose Elementary School’s Wee Deliver Post Office closed for the season this week. The final group of second grade mail handlers, sorters, and mail carriers performed their duties and received their certificates congratulating them on a job well done.

Since the opening in the fall, the 160 second graders took two-week turns during recess collecting, sorting and delivering mail to places like Big Top City, ABC, and Tuskertown – the school’s kindergarten, first and second grade classroom addresses as well as to mailboxes located outside specials classrooms and other places throughout Primrose.

Hundreds of letters were written by students and staff and hand-delivered by the eager second grade post office workers. And while they got a taste of other duties in a post office setting such as sorting and stamping, delivering mail to classrooms was the hands-down favorite. 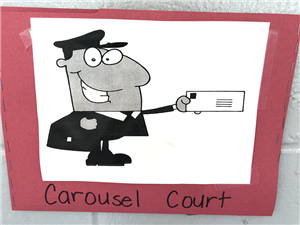 “I liked delivering the mail for the second graders in Tuskertown but I am going to miss delivering mail to my brother who is in kindergarten,” said Marcella Chiazzese.

Ava Kan said the Kindergarteners loved to get mail. “They liked getting their own mail, but they also looked forward to seeing us delivering the mail,” Kan said.

Teaching Assistant Gail Weiner, who has been running the Wee Deliver Post Office for many years, said the post office is a very positive experience for the second graders. “They do many jobs and learn to work together,” she said, and added that students learn about responsibility.

This year, Weiner said the Wee Deliver Post Office saw more mail than ever likely because the post office did not happen for the last two years. That resulted in this year’s second graders working extra hard to learn the delivery routes and find places they may not have been before.

“It is always a great experience for them,” Weiner said.