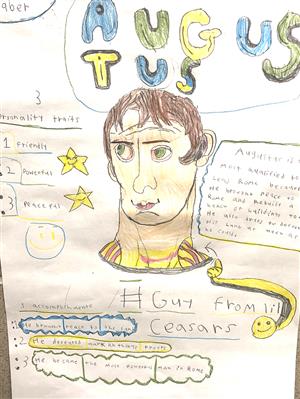 Julius or Augustus? Who was the better Caesar for Ancient Rome?

As part of their unit on Classical Civilizations, sixth grade social studies students researched both Julius Caesar and Augustus Caesar to create election campaign posters for their desired candidate in a race for the best leader of Rome.

Students in Jenna Schettino, Diane Acampora and Tara Garret’s classes researched and discussed the many personality traits and accomplishments of both leaders. Students had to create a claim with evidence and reasons to support their opinion, before creating a campaign to prove why their chosen leader was most qualified to lead ancient Rome.  Is it Julius Caesar’s intelligence, generosity and military prowess that make him stand out? Or is it August Caesar’s rebuilding of Rome and bringing peace to the lands that makes him the top candidate?

Student posters include straightforward comparisons of the two candidates while others used International Baccalaureate Middle Years Programme ideas as their guides for making their candidates stand out.

Daniel Breglio’s pick was Julius Caesar and he based his choice on this Caesar’s military career and how he worked his way up the ranks to become a chief priest. 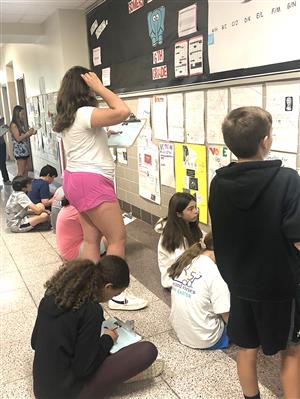 “Based on what I read, Julius Caesar worked hard to get where he did and that made me think that he would be a good leader,” Breglio said. He viewed Julius Caesar through the MYP lens and noted that he was balanced as he worked his way up the ranks and he was a risk taker in that he led many expeditions and went to war to save many people.

Ryan Ife also used the MYP traits to create a campaign poster on Augustus Caesar. Ife noted that he strengthened the army and conquered the land (risk taker) and brought peace after years or strife (principled). He also rebuilt Rome (caring) and established fire and police in the city after many years that fire destroyed the city (reflective.)

For Brynn Robinson, Augustus Caesar was also her choice. “He was definitely the better leader,” she said. “He showed respect and was kind and caring. His reign also marked one of the greatest empires in history. There was peace for 200 years.” 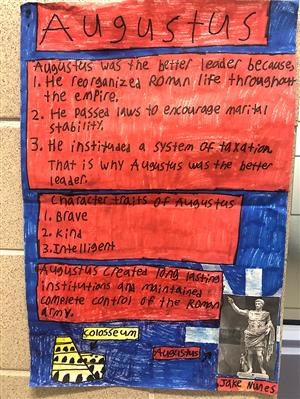 Part of this exercise was a student reflection to note what they learned by viewing posters of their peers and whether seeing this new information would sway their votes at all.

While most were set in their decisions, Breglio said he was curious about Augustus Caesar after seeing one poster that highlighted his creation of taxation and expansion of Roman roads. “It showed me that I will have to look into that a little more before I make my decision,” Breglio said.

According to Schettino, this campaign poster exercise helped students learn about informed decision making in elections and ensuring that they look at all possibilities of those they wish to elect. Schettino added that they discussed what makes good election campaigns including those that highlight the positives of the candidates and not the negatives of their opponents. 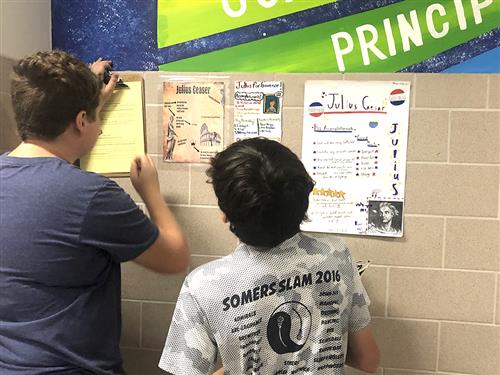