Tall skyscrapers and busy concrete streets or a quieter farm community with a babbling brook running through the center of town?

Second graders in Jessica Paperman’s class who are working on their Community Unit in social studies are creating three-dimensional projects based on rural, suburban, or urban areas. Students worked together in small groups to plan their choice of community and discussed the features that they would include.

Lego City is an urban community developed by Mason Holt, Donovan Shaughnessy , Jenna Klatsky , Stella Varbero, and Lexi DeVito and will include features such as skyscrapers, construction sites, apartment buildings, schools and playgrounds as well as taxis, buses, and a subway station. The city will rise up from the poster board base using items like boxes, playdoh, milk cartons, a 3-D pen to create a stop sign and actual pieces of Lego. The group was excited to see their city come alive as they began with grey paint for the roads and sidewalks.

“We chose a rural community because it’s quiet and pretty and there is a lot of grass and trees, and not a lot of people live there,” said Alonzo. For their project, the girls will build their rural area using real pebbles, tissue paper, cardboard, pipe cleaners, toothpicks and more. “We are creating a lot of space so kids in this community can have a nice playground,” Ritacco said. 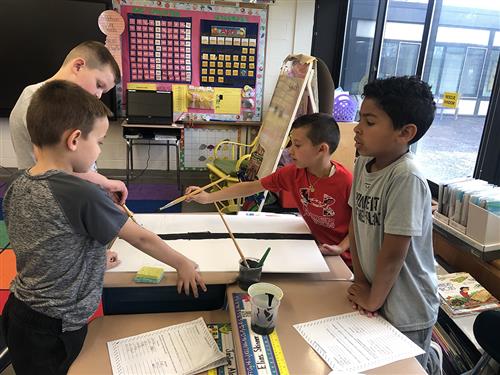 The two groups planning suburban areas determined the best combination of sidewalks and park-like areas and used a ruler to ensure there is equal space for cars, walking dogs and riding bikes around the Dogwood Town and Preston Town neighborhoods.

To prepare for the project, Paperman said the students identified the distinct characteristics of rural, suburban ad urban areas including their different styles of residences. They compared and contrasted the distinctive features and explored how the common interests in each reflect in the structures they see in those communities.

“We talked about urban streetscapes and rural and suburban neighborhoods and the features that would make up these communities,” Paperman said.