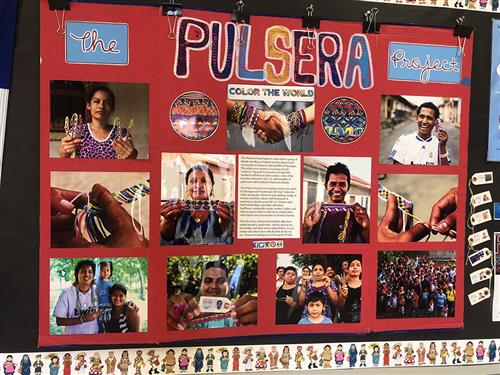 You can spot the brightly colored woven bracelets on the wrists of many students and staff at Somers Middle School.

The Pulsera Project wrapped up earlier this month with a successful sale of hundreds of beautifully crafted one-of-a-kind hand-woven bracelets and purses made by artisans from Central America. The sale, spearheaded by the International Club, raised $2,650 that will be sent back to the Pulsera Project.

The Pulsera Project is a non-profit organization committed to helping Central American communities and U.S. students through empowerment and education. The organization partners with student groups to bring the colorful handwoven pulseras (bracelets) and bolsitas (purses) made by artists in Nicaragua and Guatemala to their communities to sell. All proceeds are sent back to the Pulsera Project.

The Pulsera Project was introduced to Somers Middle School students by World Language teacher and International Club Co-Advisors Annette Soares and Angie Gottlieb. In addition to being a service project, the Pulsera Project is also a tool for introducing topics like solidarity, charity, and global citizenship to students. Soares and Gottlieb prepare an Advisory lesson for students that includes a promotional video, and they also speak to the initiative during World Language classes.

“This is a fair-trade initiative, and the sale provides a market for the artisans to sell their products,” Soares said. “We work in partnership and solidarity.”

To prepare for the sale, International Club members decorated and placed flyers around the school and decorated the bulletin board outside the main hallway. Members also sold the items to attendees at the drama club production of “Peter Pan” as guests arrived. The pulseras sold for $5 each through a contactless Venmo transaction. 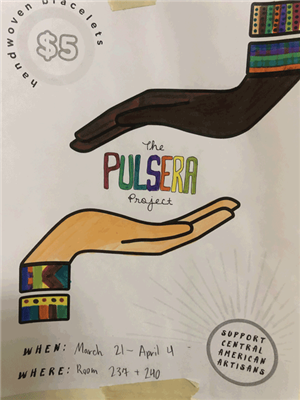 “I feel good about doing this project because it’s for people who really need our help,” said eighth grader Marley Hawkins, secretary of the International Club.

“The best part is that this is not a self-profit sale,” said treasurer Mia Paulmeno who added that the student body enthusiastically supports the initiative as a way of helping those less fortunate in Central America.

Students who purchased the pulseras and bolsitas said they liked the idea of supporting a good cause and even purchased specific color combinations similar to flags in Central American countries.