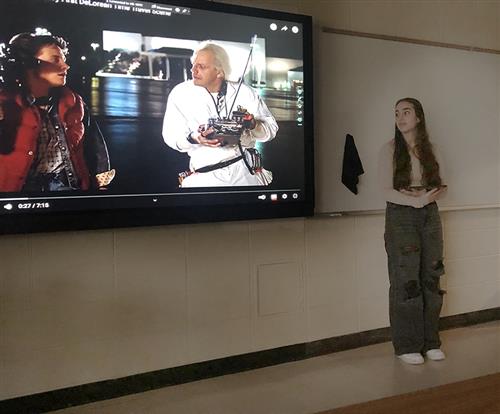 The time travel theory in “Back to the Future.” Residents on “Grey’s Anatomy” who work 48-hour shifts. Spiderman’s ability to scale a building. Are these concepts true, partially true, completely false or emerging science?

Answers to questions like these are what students in Lori Kearns’ Contemporary Issues in Science class are pondering. They are in the middle of presenting their “Science on Screen” projects and the takeaway is this: Don’t believe everything you see on the big screen. But don’t discount it, either.

Student projects centered on reality versus fantasy in movies and television -- how concepts we believe to be true on the big screen could be false as well as the obviously fake science we assume is made up in the writer’s head might actually be based on real concepts. They posed the questions, showed concepts or ideas from movie or television clips and then provided the research to concur or refute them.

Zoe Rubin’s project included the time travel concept from “Back to the Future” and she showed the iconic clip of the DeLorean hitting 88 miles per hour as the means to jump time. Rubin’s research on space, time, gravity and energy drew the conclusion that Robert Zemeckis’ version of time travel was not feasible but that a much smaller jump in time could be. “Traveling faster than the speed of light is not possible,” Rubin said. “But it could be possible for time travel by a few seconds.” 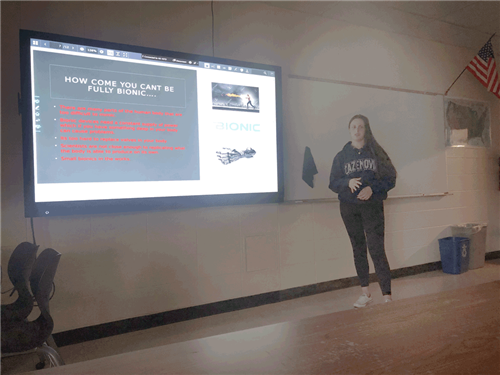 Samantha Tremblay’s concept – “Why residents can’t work 48-hour shifts” came from an episode of “Grey’s Anatomy.” Tremblay, an avid watcher of the show, researched a passing reference to residents working 48-hour shifts. She found that hospital residents are actually restricted to working only 24 consecutive hours by a law passed in 2003. “You can’t always believe what you see on tv,” Tremblay said.

For Jake Riina, part of his project turned out to prove that something he thought was fantasy is actually emerging science -- Peter Parker’s ability to scale a building. “I actually found some scientific possibilities when I researched spiders,” Riina said. “Scientists are working on replicating spiders setules by using adhesive pads for humans to use to climb walls.”

Anita Brahimaj used ideas from Marvel’s “Wolverine” movies for her project and substantiated that the Wolverine’s retractable metal claws are cinematic license. “The aluminum alloy used in the movies is not part of our periodic table of elements,” she said. But the retractable metal claws of Wolverine, while obviously a science fiction premise, led her to research regeneration and prosthetic limbs.
Contemporary Issues in Science is an exploration of various topics from all areas of science related to current events. “Concepts in this course are really any contemporary issues in science that are unresolved,” Kearns said.

The “Science on Screen” project, unlike one she has ever done, had prompted a lot of questioning and critical thinking by students in areas they may not have thought before. “They think about things in a new way like Superman can’t really fly, but could he? Is there science to back it up?” Kearns said. Both she and her students are inspired to go back to a movie or show following the sharing of the clips in class to look at it from a whole new perspective.

The next class project will focus on issues affecting teenagers today and Kearns said she is excited to see where her students’ research leads them.