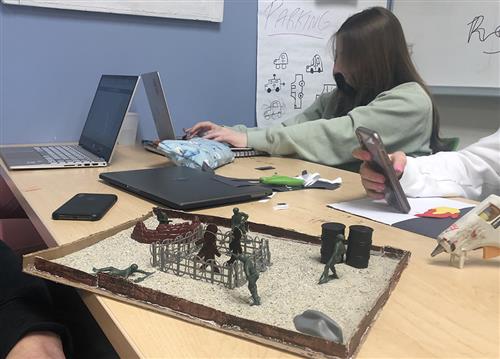 Darfur. Rwanda. Cambodia. Bosnia. The Holocaust. Students in Tara Kearns and Kat DeLandri’s Humanities 10 class are creating projects to ensure that terrible genocidal events like these and more are not forgotten.

Students are immersed in learning of the mass atrocities and human rights violations of various genocide events to apply to a Human Rights Memorial Project – a visual representation of what happened and why it is important to never forget.

Students chose the subject of their project from genocide events throughout history, and some based their choice on personal connection to a specific event. Part of the project includes an “artist’s statement” – how their visual representations convey powerful messages about the events or individuals they memorialize. Using a variety of mediums, student projects ranged from sketches, drawings and paintings to computer aminations, dioramas, clay representations and more. 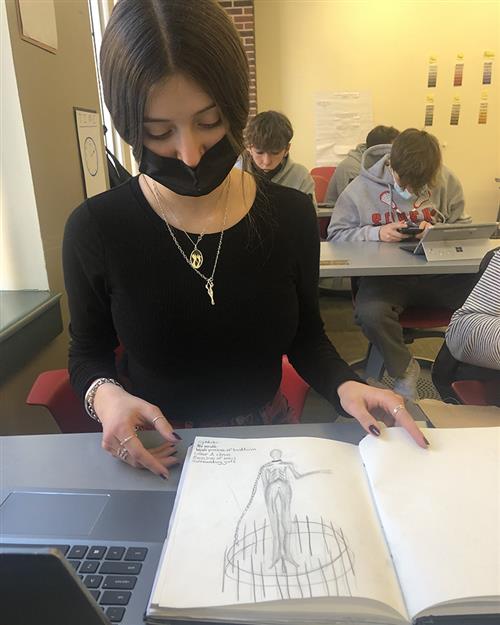 Sebastian Wissa composed a song he named “Sayfo” to memorialize the Assyrian genocide of Christians during World War I. “The song is to show the sadness and sorrow of it all but also how hope and love brings us all together,” Wissa said. This Assyrian genocide is personal for him. “My great grandmother became an orphan because both of her parents were killed during the Sayfo,” Wissa said. “We have heard bits and pieces about it over the years, but it’s not really talked about. I wanted to write a song to honor it.” Wissa used the Band Lab platform to record himself singing harmony and melody.

The numbers “8 3 7 2” stand out in bright red over a black background to visualize how many Bosnian Muslims died in the Srebrenica massacre of 1995. Matt Klee said he will use an empty black shoe box adorned with the red numbers and the flags of Bosnia and Serbia to represent the ethnic cleansing and destruction of the event. He said he chose this part of the Bosnian genocide because he feels it is lesser known. “We don’t really hear about much about this part, and I wanted to bring it back for remembrance,” Klee said.

Sophie Tuncoglu’s Rwandan Genocide Project is a multi-colored five-row flag adorned with beautiful white doves and a barbed wire fence. “The old Rwandan flag (green, yellow and red) represents the genocide that took place,” she said. The new Rwandan flag of blue, yellow and green with a shining sun and doves looking down at the past represents the renewal of the country. “There was so much destruction,” Tuncoglu said. “It’s hard to believe that nearly one million people were killed in 100 days.”

Molly Fink, who is also memorializing the Rwandan genocide, said the focal point of her project is a flame in the middle of black and white boxes. “The fire represents the rebirth of the nation and how they came together and are learning to live without the terror,” Fink said. 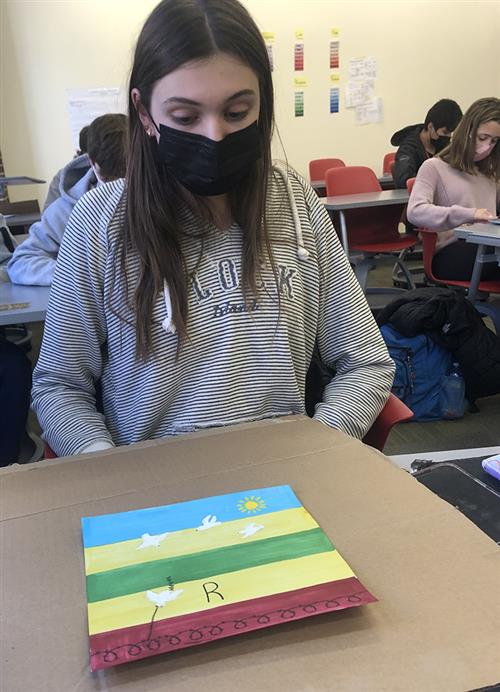 A clay model of a girl in a blue scarf in a sea of faceless gray represents the classification of victims of the Cambodian genocide under the Khmer Rouge. “The blue scarf meant that you were scheduled for extermination the next day,” said Kody Nestor. Nestor will use the blue scarf, clay, cardboard and popsicle sticks to represent how the government of Cambodia saw the victims. “They were non-humans at that point,” Nestor said.

Kearns said she was impressed by the students’ thoughtful and intentional work on this project.  “It’s been so special to witness their thinking and planning unfold and translate into these unique presentations,” she said. “I’m so excited for members of the Somers High School and wider community to share in this experience.”

This year Somers High School will host the annual Somers Holocaust Memorial Commission’s Yom Hashoah Remembrance Ceremony on April 28 with North Salem High School. The student Human Rights Memorial projects will be displayed for members of the community, and three projects from each school will be chosen for awards. 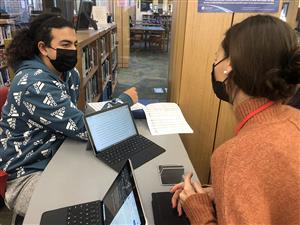