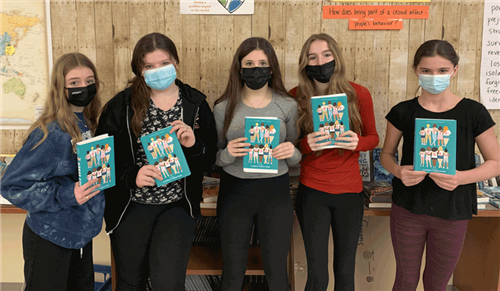 Few people get to meet the authors of the books that inspire them. But seventh graders in the Somers Middle School WIN Book Club did just that.

Carrie Firestone, author of the New York Times bestselling middle years novel “Dress Coded,” popped into their Book Club session via Zoom this week for a quick talk, Q and A session, and some advice for future writers.

“This book started with me being mad,” Firestone said. “Dress Coded,” she explained,  began with issues she saw in her own daughters’ school in Connecticut – girls being unjustly targeted and shamed by teachers and/or administrators for what they wore and how this behavior of “dress-coding” developing girls is harmful to their self-esteem.

“Every story comes from somebody’s personal experience,” Firestone said. “I always tell young people that if you have feelings about something, write them down. It could be a powerful book that resonates with a lot of people.”

Firestone uses small chunks of text centered on the main character’s use of a Podcast to tell the story. One student, Erin O’Brien asked Firestone why she decided to base the story on a Podcast rather than traditional chapters. 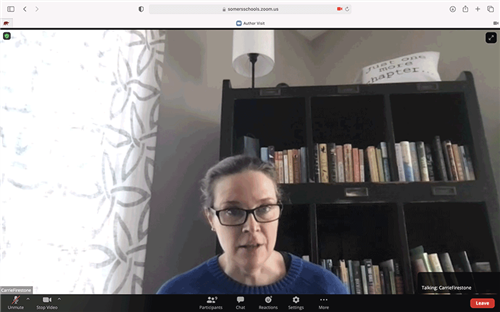 “I thought about if I was in middle school right now, how I would get the word out to the most people,” Firestone said. She added that the Podcast format comes back in the sequel, a novel about members of a climate change club at the school.

Firestone asked the Book Club members to think about some issues that are important to them now and offered advice. “I encourage you to write these kinds of books yourselves,” she said in response to the subject of toxic internet friendships.  “It would be powerful to have that raw story of someone who lived it. A lot of people can relate to it and it can be healing to write that story.”

The Book Club members said they were excited to have met Carrie Firestone and are looking forward to reading the next book in the series.

“She writes about topics that are very relatable and present,” said student Emma Steinberg.

Teacher Christina Sweeney, who facilitates the Book Club during WIN, said she was excited for the students to utilize Firestone’s writing, especially next year when they will participate in the National Novel Writing Month as eighth graders.