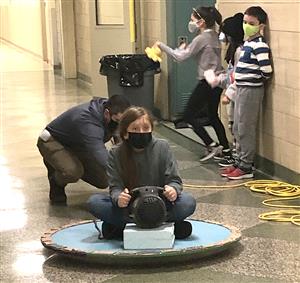 This was the recipe for success the fourth graders in the Somers Intermediate School STEM Club used for their hovercraft project, which made its debut voyage in the halls of the middle school this week. SMS teachers Matt Lugo and Dan Devito, the STEM Club advisors, were on hand guiding each student’s ride on their hovercraft creation.

Students crafted the hovercraft using a large circle of plywood fitted with a hole for the power source – a shop vac blower reinforced with Styrofoam. Then students attached a shower curtain to the bottom to catch the large volume of air from the blower, the key to the structure’s ability to “hover.” 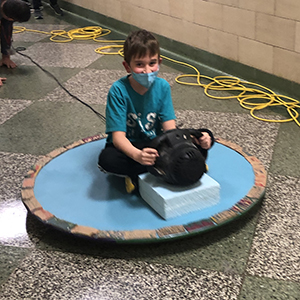 “The key to a good ride on the hovercraft is to be centered and tuck in tight,” Lugo told the students before the first student climbed on the round disc. As the air-filled the bottom, the hovercraft rose off the floor and the students were ecstatic to ride down the hallway with a little shove from Lugo and Devito.

“It was a little scary at first but then I got used to it,” said Kenna Minnerly, who clapped throughout her ride. “I loved it! It was so much fun.”

Fellow club member Lucas Ruck agreed. “The vibration felt a little weird at first, but it was very fun.”

The fourth graders in the STEM club have been meeting in Lugo’s classroom to build the hovercraft after school for the past several weeks. Each student was able to decorate their own little cardboard tag, similar to a license plate, to place around the perimeter of the craft.

“It was exciting to see the students work as a design team to accomplish their goal of building a riding hovercraft,” Lugo said. “I hope projects like this help inspire them to pursue more engineering experiences in the future.”