How can you study a people who have disappeared from civilization?

Somers Intermediate School fifth graders put on their anthropologist lenses to look at the many aspects of the ancient Mayan civilization in a mini program with the Putnam | Northern Westchester BOCES Center for Environmental Education.

The virtual session hosted by CEE environmentalist Dan Novak gave the students an overview of where the Mayans lived related to present day Central America, their culture, government and behavior, and how the now extinct ancient culture was incredibly advanced in its tools and technology.

Students learned about the various tiers of the Mayan society and pointed out differences in how the royalty were dressed in more colorful coverings than were the artisans and craftspeople. 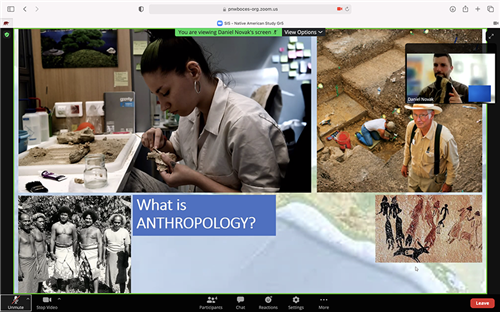 They also learned about hieroglyphics and how the Mayans had an advanced written language and tools the culture used, including the stone axe, “one of the most important tools they used,” Novak said. He explained that the ancient multi-tiered temples and cities were all constructed by the Mayans who worked together clearing land amid the rainforest – a process called deforestation that is believed to have contributed to the civilization’s demise.

Ava Parkin was most intrigued by the sudden vanishing of the culture from civilization. “They just ‘poof!” disappeared,” Parkin said. “They could have died from some problem like food shortage or something. But learning that was the most fascinating part to me.”

The fifth grade is beginning a unit on the Mayan culture and the CEE program will be a great help to students with their research, teacher Kelly Gronert said. “We are just beginning our nonfiction study of the Mayans,” she said. “We will be doing some research and eventually writing a nonfiction guided Mayan piece.”