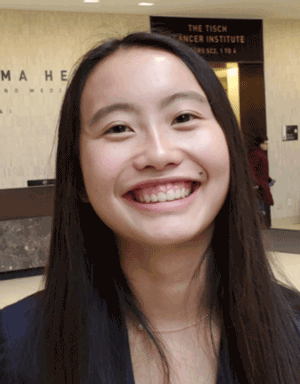 Somers High School senior Emily Dodd has been recognized internationally for her science research by the Regeneron Talent Search competition. The program is the nation’s oldest and most prestigious science and math competition for high school seniors.

“I think it’s a good recognition to receive,” says Dodd, “because the competition encompasses the entire United States and eight other countries. It is a nice honor to be chosen.”

Dodd’s project, developed in her Science Research class, focuses on identifying treatments to combat learning and memory impairments in people with Parkinson's Disease. This is her second project in the class. The first focused on levels of depression in Parkinson’s Disease patients.

“My papa [grandfather] passed away from Parkinson’s the year before my sophomore year and I wanted to see if I could do anything to contribute to the research,” says Dodd.

Each year, nearly 2,000 students submit original research in scientific fields of study to the Regeneron competition and are judged by leading experts. This summer Dodd worked with a mentor in a research lab at the Icahn School of Medicine at Mt. Sinai in New York City, and once school started this fall, Dodd participated remotely and in the lab on weekends.

“Emily spent countless hours working alongside the professionals at Mount Sinai in the summer of 2021 to conduct her research,” says Science Research advisor, Bill Maelia. "She is a tremendous student who has shown an exceptional amount of dedication and passion for science.”

As one of only 300 students selected in the Regeneron competition, Dodd receives $2000 for herself and another $2000 for STEM-related activities at Somers High School. Later this month, 40 of the 300 scholars will be named Regeneron Science Talent Search finalists. The finalists will then compete for more than $1.8 million in awards during a week-long competition in March.

In addition to her love for science, Dodd is also a dedicated cellist. She plays in the orchestra and chamber orchestra at the high school and takes private lessons. She was also selected for Area All-State by the New York State School Music Association before it was canceled due to the pandemic. Next fall, Dodd will be a freshman at Washington University in St. Louis, Missouri. She chose the school for its strong research program and will be a biology major on the neuroscience track.