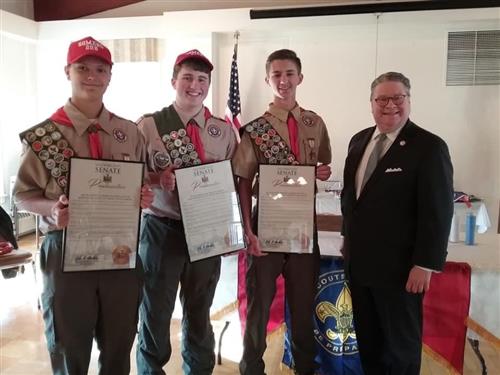 Hard work, dependability, perseverance and survival skills are some of the incredible lessons that Robert Moore, Liam Higgins and Conor McCooey have learned as members of the Boy Scouts of America.

Last month, the three Somers High School seniors hit a milestone – they were promoted to the highest rank of Eagle Scout in a ceremony with their families, members of the BSA and a Senate proclamation from New York State Senator Pete Harckham.

“The BSA has taught me many things,” Higgins said. “I have learned new skills that range from knot tying to first aid, to skills in leadership but I think that the most important thing that I learned from the BSA was the character of a Scout: trustworthy, courteous, kind, obedient, cheerful, reverent.”

“I am both humbled and extremely happy to be an Eagle Scout,” Moore added.  “Being an Eagle Scout is a testament to the work ethic that has sustained me throughout my Scouting career.”

Moore joined the BSA as a Cub Scout in third grade. “I saw it as an opportunity to get outdoors and engage in fun, yet educational activities while being around my friends,” he explained. Moore said his dad, an Eagle Scout himself, was a positive influence in his scouting experience. “He has consistently supported trips with me, including a nearly 120-mile trek at Philmont National Scout Ranch in New Mexico, and he has taught me some of the most valuable lessons I have learned in Scouting,” he said.

Moore based his Eagle Scout project around one of his other passions: history. His project– which took 14 months from start to finish -- was the installation of an interpretive historical sign in Bailey Park that denotes the Somers Hamlet's status on the National Register of Historic Places and a corresponding website accessible by QR code. The sign details the local history of the region as it relates to the American Revolution and the early days of the American Circus.

McCooey said he joined Boys Scouts at the urging of his parents. “They thought it would give me the experience of being part of a team,” he said. “My parents signed me up and I never looked back. I have learned priceless life skills in my time as a Scout. The main things I feel it taught me is how to be dependable, respectful, helpful, survive on my own, and how to be financially smarter.”

But more than that, McCooey said he has learned through doing merit badges, volunteering, and being out on scout trips the importance of helping people and doing things that improve the community.  “Becoming an Eagle Scout was by far one of my biggest accomplishments to this point,” he said. “I am proud of myself that I worked towards a goal for 10-plus years and made it.”

For his Eagle Scout project, McCooey restored an antique fire apparatus that sits outside the Somers Volunteer Fire Department in Granite Springs. “I knew for long time that I wanted to do something connected to the firehouse,” McCooey said. “The SVFD sponsors our troop and I have family members that are first responders, so it’s a personal connection. Every week they allow us to use the Amawalk firehouse as a meeting spot for our troop and I thought of this project as a way to thank them.”

Higgins said becoming an Eagle Scout gives him a great sense of accomplishment. “It feels great to finally become an Eagle Scout,” Higgins said. “It was a culmination of many years of hard work, and it is a very rewarding experience.”

His Eagle Scout project consisted of building and installing 10 bat houses around Muscoot Farm. The project will help remove the bats from inside the barns, control the mosquito population, assist an endangered species, and educate the public about the benefits of bats.

The three boys said the Somers town and school communities have been very supportive of them in their scouting endeavors and are thankful for the encouragement at every milestone in town and at school.

“The Somers school community has helped me achieve my goals by providing me with one of the most supportive work environments I have had the pleasure of being in” Moore said. “Everyone at SHS, from teachers and staff to students and coaches, have been nothing but kind and helpful, and I feel that this support certainly helped me get through some of the rougher moments of my Scouting career.”

All said they would encourage younger Somers students to become involved in Scouting. “It represents a perfect blend of fun activities and valuable life lessons,” Moore said.

McCooey agreed. “I believe the Somers schools community has helped me achieve my goals by giving me a place I could grow as a person and as a student and never for one second make me think I can’t achieve any goal I set my mind to doing. The educators have always given me inspiration to set goals and then achieve them. I am grateful that I attended Somers schools.”

The Somers school community, Higgins added “has helped me to achieve my goals by encouraging and working to build the same good character in its students that the BSA builds in the Scouts.”

As for the future, all three plan to attend college. Higgins plans to study electrical engineering in college. McCooey said he will likely major in sports management and Moore is leaning towards international relations and/or Middle Eastern Studies.