SMS Technology and Engineering Students Give Monopoly Houses a Makeover 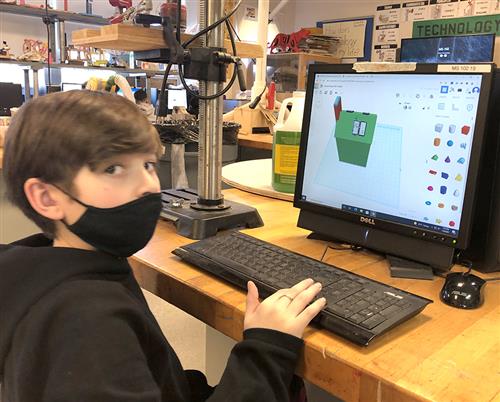 Sleek, double-decker modern structures. Modern A-frame houses. Two-story colonials with garages. These are some of the ideas students in Matt Lugo’s sixth grade Technology and Engineering Class created for the task before them: they’ve been “hired” by Hasbro to modernize the outdated, boxy houses that embellish the Monopoly Board game.

“We are teaching the kids how to use 3D design using the Tinkercad software,” Lugo said. “They started the unit by following my directions to draw a wrench. Then they drew the Parthenon and then the Eiffel tower.”

Lugo said the project – assuming roles as designers for a project in a company like Hasbro -- gets kids involved in solving real world problems. “My goal is for them to get good enough at Tinkercad so they can dream up an idea in their heads and then make it on their own,” he said. “Hopefully they can make the world a better place with some cool invention.” 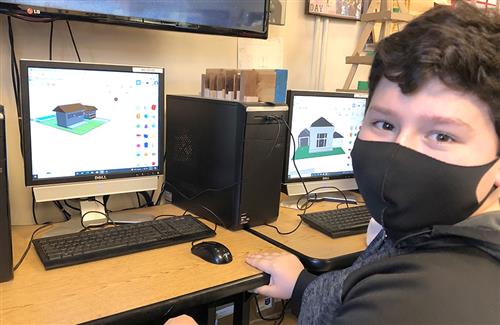 Ethan Roberts designed a house with large circular windows and a wrap-around deck. “It’s fun,” Roberts said. “You could get as creative as you wanted and do the styles you like. My favorite parts of my house are the little details that made it like a real house, like the barbeque in the back.”

Once complete, the students’ ideas will come to life as complete prototypes created on a 3D printer. The Monopoly house project is a precursor to another out-of-this-world project -- designing a house that people could live in on Mars and then a Mars Rover.

Lugo said he would make copies of some of the house designs to add to his own Monopoly game at home.