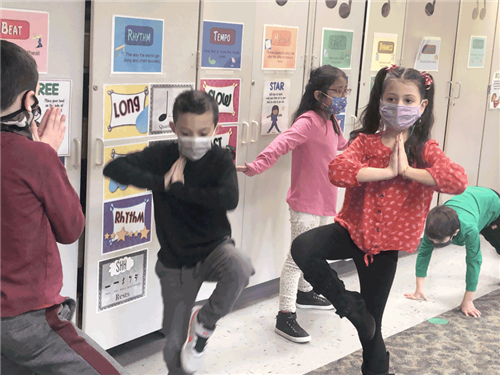 It’s been a month of music and culture for Primrose students in music class.

Students learned about Hanukkah traditions by reading The Hanukkah Hop by Erica Silverman and listening to the song “Sevivon” about a dreidel. Teacher Stephanie Closson had the students respond to the music by turning themselves into dreidels and spinning. During the other sections, they added a rhythmic ostinato using body percussion. The students were able to choose their own movements to add to the ostinato.

All PES students read a version of The Nutcracker and sampled the music. Kindergarten and first grade students brought the learning to life using scarves while the second graders used pop tubes to dance to Trepak, the Russian Dance. The first graders listened to “March” and focused on Rondo Form and Steady Beat, playing bells and maracas, but when they “rode” the pool noodle “horses” the learning was off to the races!

This week, second graders took the Nutcracker to a new level. They began with some mindfulness and yoga to classic pieces from the ballet. Students then heard Duke Ellington’s jazz version of "The Nutcracker" and played along beating their drums as she read the story "The Nutcracker in Harlem" written by T.E. McMorrow and illustrated by James Ransome.