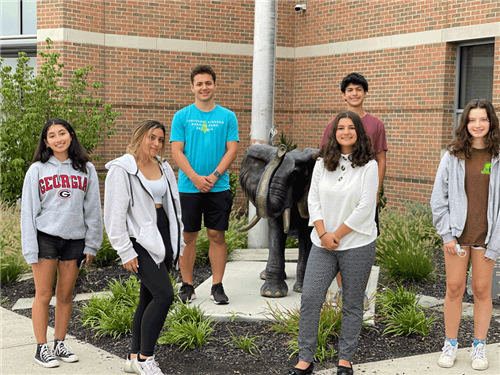 The students earned this recognition based on their academic achievements and outstanding performance on the PSAT and/or AP. To be eligible for the National Recognition Program, students must have a 3.5 GPA or higher and identify as African American or Black, Hispanic American, or Indigenous and attend school in a rural area or small town.

Rosamia Perez is a senior and the President and founder of the Anime Club at Somers High School. She is also a member of the Astronomy Club. She won the St. Bonaventure “Bonnie Scholar Award” last June for her academic performance in Somers.  Perez has applied to both local and out-of-state colleges and is waiting on decisions. She plans to major in Biology. Perez used to compete in fencing before moving to Somers.

Brandon Armstrong is a senior and plans to attend college in the northeast to get a bachelor's degree in computer science and a master's degree in data science. He is a member of the varsity Track and Field team and Co-President of the Physics Club. Armstrong also received the Excellence in Computer Programming Award. His interests include playing the alto saxophone and Ultimate Frisbee.

Laura DiPalma is a senior who plans to major in Biology on the Premed track next year. She belongs to several clubs including the Leos Club, Student Athletes Against Substance Abuse, Youth-to-Youth and Peer Leadership. DiPalma is also a member of National Honor Society, as well as the Italian National Honor Society and plays soccer with the Girls Varsity Soccer Team.

Alejandro Tellez Calderon is a junior at Somers High School. He is a member of the Somers Track and Field team and a part of several clubs including the Biomedical club, National Honor Society, Psychology Club, and Physics Club. Calderon participates in the Leos Club and the President’s Junior Leadership Council of Northern Westchester Hospital, which works to discuss and create solutions to the problems of everyday high school students. Calderon’s college plans will likely include a major related to medicine.

Ariana Carchi is a senior interested in majoring in either computer science or economics in college. At Somers High School, Carchi belongs to the Physics and French Clubs and is a member of various honor societies including the National Honor Society, French Honor Society, and the Math Honor Society. Carchi was the recipient of the Rensselaer Math and Science award.