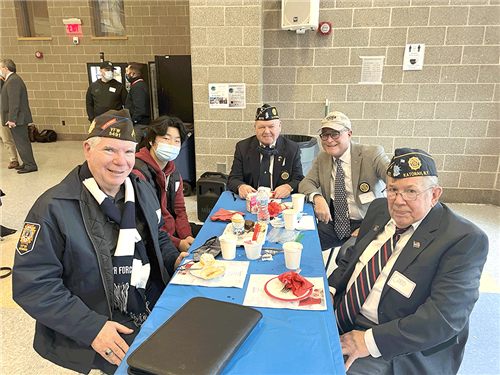 Smiles, handshakes, and cheerful greetings filled the Commons at Somers High School during a recent brunch organized for local veterans by the Student Council. More than 100 veterans and their family members were served by student volunteers and entertained by different musical groups and the high school dance team.

“We had a very positive reaction from the veterans and their families,” says Student Council President Megan Spencer. “Lots of veterans were excited to be with people that they have a common story with. It was amazing meeting veterans who served as recently as 6 months ago and veterans who served in World War II.”

“The food, company, and entertainment were exceptional,” says Col. Tom Colella, U.S. Marine Corps, Retired. “Thank you for recognizing all of the vets.”

The members of the Student Council notified local veterans and veterans’ groups about the brunch with help from the town of Somers, and they also put a notice in the Somers Record newspaper and posted the invitation on the school district’s Facebook page.

The response was outstanding and spanned all service branches. Four veterans who are in their 90s and served in World War II attended, as did two members of the National Guard who just returned from active duty in the Middle East.

The event was held after dismissal on Wednesday, December 8, which was a half-day of school for students. With the help of the school district’s Food Services Department and a crash course on waiting tables, students brought guests their food, drinks, and dessert. Of the 40 volunteers who participated, many were members of the Student Council and National Honor Society. Senior Lily Carino sang the national anthem, and members of the music honor society Tri-M performed throughout the brunch. Students spent time at the tables, getting to know the visitors and hearing stories about their experiences.

“It is very encouraging to see young men and women honoring our local veterans,” says Paul Lozito, a Vietnam veteran who served in the Army Infantry. “The food, music, and dancing were great.”

The event was funded by the Student Council, which raises money at the concession stand during football games, as well as other events throughout the year. Plans are in the works for next year’s event, and organizers are hoping it will become an annual tradition.