Senior Student-Athletes Commit to Next Level 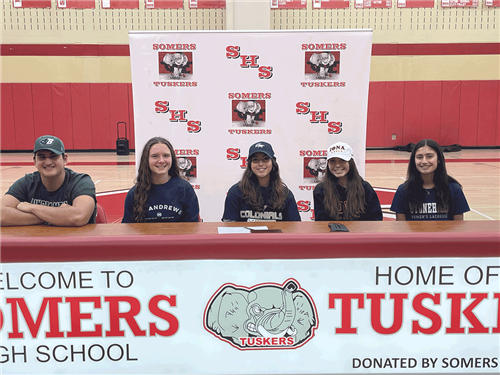 Five student-athletes at Somers High School signed commitment letters this week to play a sport at a college or university. The seniors signed their letters in the lower gym at the high school in front of family, friends, and their high school coaches.

“These kids have worked hard, and we are so proud of them,” says Roman Catalino, the director of athletics in the Somers Central School District.

After the students signed their letters, they took pictures wearing their respective college sweatshirts and hats, surrounded by beaming family members and coaches. Luciano has had his eye on Binghamton University for several years and was accepted into the engineering program. He credits his school and community with his success.

“Somers has really shaped who I am,” says Luciano, “Especially with my friends and coaches, who are really great.”

Sirchia, who is also the varsity field hockey captain, says she took her time before committing to a school for lacrosse. She wanted to make sure the school she chose was the right fit, which she found in George Washington University in Washington, D.C.

“I’m a city girl, and I love that Georgetown is right there,” says Sirchia. “I love the environment, and the coaches are just the best.”

There will be another signing ceremony this spring when the next round of Somers student athletes commits to colleges and universities.