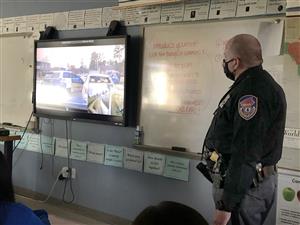 They know him as their School Resource Officer, but Matthew Hickey stopped by Christopher Kollarus’ Criminal Law class at Somers High School in an official capacity -- to give students insight into the work of police officers and how they deal with real law enforcement situations.

With the help of actual police dashcam footage, Officer Hickey engaged the students in conversations about the actions of both the suspects and the police officers as they analyzed incidents captured on video. 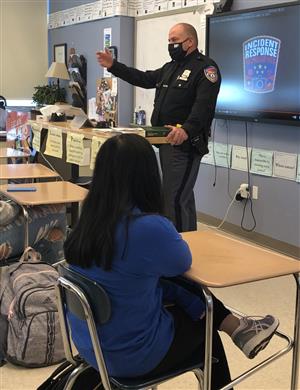 “We can talk about what laws were being broken and the actions of those involved based on what you know about the criminal justice system,” Hickey told the students.

The videos sparked much classroom discussion and students, who had just finished their unit on Investigation, offered their opinions based on what they have learned in class so far. Hickey’s insight into real life police incidents helped students navigate the content in the videos with a new lens.

Hickey has been assigned to SCSD as a School Resource Officer for the past nine years. He shared with students his 18 years of knowledge and experience as a police officer with the Westchester County Police Department. He also gave students an overview of police department operations, interoperability, and jurisdiction with an informative public relations video “We are WCPD...You can be too!”

“It was a good talk,” said freshman Zach Kessler. “I learned a lot about what goes on during police interaction.”