A Sea of Teal Towels for Christine Camarra 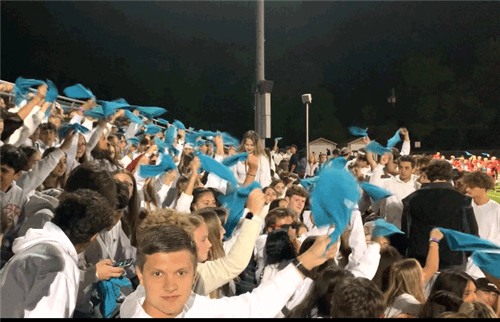 The sea of teal towels waving in the Somers High School stadium brought tears to the eyes of many at a recent Friday night varsity football game. The towels were in honor of Christine Camarra, a Somers elementary school teacher who passed away last month after a battle with ovarian cancer.

“She was strong and determined,” says Bennett Leitner, a high school senior and former student of Camarra’s, who spoke at halftime and led a moment of silence for his beloved teacher. “I credit her with inspiring me.”

Leitner, along with fellow varsity soccer captains Max Hechler, Jake Rinna, and Ethan Cohen, sold the teal towels as a fundraiser in support of the Camarra family. Teal is the color of ovarian cancer awareness. Christine’s husband, George, is also a teacher at Somers Intermediate School. The boys publicized the sale of the towels on social media and during morning announcements encouraged students to buy a towel for two dollars during lunch periods.

“We thought it was the most convenient thing to do for players, students, and at same time have a big impact in raising awareness for ovarian cancer and the loss of Mrs. Camarra,” says Leitner.

Nearly 400 towels sold in minutes, and many students chose to donate additional money. In total, the effort raised nearly $1,000 for the Camarra family.

“There are a few moments you always reflect on at the end of a school year with pride and happiness, moments that you see the best of the best in students,” says high school dean of students Marc Hattem, who taught at Somers Intermediate School with Christine Camerra for many years. “When I look back on this year, the actions of the boys will most likely be my fondest memory from the 2021-2022 school year.”

“Mrs. Camarra always cared about her students,” says Hechler. “She left the biggest impact on me and meant so much to the community.”

Some football players wore the teal towel on their hips during their game, and soccer players have picked up the gesture by wearing teal tape around their wrists during their games. Hechler says he and other players plan to continue the remembrance for the rest of the season.