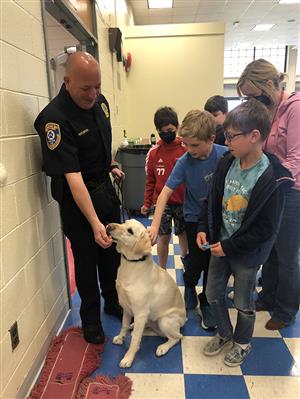 Squeals of delight and the thunder of clapping echoed in the Primrose Elementary School cafeteria at the amazing talent of Harley, the K-9 Officer who can seek and find hidden electronic devices. Harley and her human partner, Westchester County Police Detective Brett Hochron, visited Primrose Elementary School second graders this week to give students a glimpse of the special talents of this law enforcement duo who help solve cybercrimes together.

There are police dogs that find drugs and explosives. Some are search and rescue dogs and others who help officers apprehend criminals. And there is also a small number of dogs like Harley, a six-and-a-half-year-old Yellow Labrador Retriever who is the first K-9 officer in New York to be trained as an electronic seeking dog. She is one of 10 electronic sniffing dogs in the country.

Harley and Detective Hochron were trained to work together on cybercrimes by the Connecticut State Police Department. Harley has been a member of the Westchester Country Police force since 2017 and according to Hochron, has one of the best noses around. “She has an incredible sense of smell,” Hochron said. “And she gets really excited when she knows she’s going to work.” 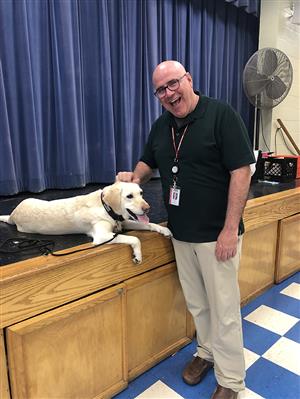 He told the second graders that Harley is adept at using that sense to find digital storage devices - smart phones, USB drives, laptops, iPads, memory cards, flash drive, thumb drives and cameras to help solve crimes. Harley works on the command “seek” from Hochron and when she finds an electronic device is rewarded with a treat. Hochron said Harley’s talent to seek out the scent of electronics is an invaluable asset to police who often must deal with cyber components in solving crime today.

Prior to bringing Harley into the Primrose cafeteria, Hochron hid several electronic devices for her to find and the students were excited to watch Harley work. Harley found a cell phone under a mop, a flash drive taped under a table, a laptop hidden in a cabinet and more.

“I had never heard about this kind of search dog before so I was excited to see her,” said Keegan Geary.

“I liked watching her go and find all the hidden electronics,” said Jennie Krzeminski. “I know dogs can smell a lot of things, but I was surprised she found so many of them.”

Harley and Detective Hochron’s visit is the first of four to Primrose this spring by the Westchester County Police Department. Later this month, students will meet the department’s Bloodhound and bomb sniffing K9 officers. In June, the helicopter will land at Primrose for a school-wide assembly by the officers in the WCPD Aviation Unit.